The low-profile containers for the Vitamix Ascent Series high-speed blenders are visually very similar to the containers of the Vitamix G Series (Vitamix Pro 750, Vitamix Pro 300). Although the long blades are identical there are some differences:

Previously, Vitamix lids were mostly black or gray rubber/silicone. With the Vitamix Ascent Series, Vitamix has introduced the transparent lid made of Tritan, which clicks into place with a noticeable and audible click. You can be sure that nothing splashes out unintentionally during the blending process. The lid sits stably and the lamellas keep it tight. Speaking of lamellas - these should be removed regularly for separate cleaning so that no food residues get stuck. Overall, the lid has a slightly higher quality than what we know from the older Vitamix models - a successful improvement.

The new blenders from Vitamix now have the ability to detect the attached container via NFC wireless technology (Near field communication). This ensures that the Vitamix can only be activated when the container is mounted AND the lid is engaged. The new technology also adjusts the maximum speed and blending time to the container. While the supplied container can run at maximum speed (ideal for smoothies), the small Mix & Go containers can only be used at low speed. This is due to the frictional heat that cannot evade from this airtight container - high temperatures would lead to deformation of the container.

Each high-speed blender in the Vitamix Ascent series has a display that displays the elapsed blending time. When using timer programs or when using the manual timer of the Vitamix A3500i, the display shows the remaining time. The A3500i also displays the selected program/pulse mode, speed, and a countdown icon that indicates whether the clock is running forward or backward.

Touch panel and endless dial of the Vitamix A3500i

With the introduction of the touch panel on the Vitamix A3500i, another technical refinement was introduced: The Endless Rotating Wheel. Why Endless? The turning wheel is electronically controlled and can be turned continuously. Meanwhile, the speed is shown on the display. As soon as the blending process is finished, the speed automatically returns to the slowest level 1. This means that the machine always starts at the lowest speed. Gone are the days of accidentally switching on the device on the highest speed level. An ear-friendly function that also increases safety at the same time. The rotating wheel itself has a ribbed rubber surface and rests comfortably in everybody's hand. The rotary switch engages at each speed setting, this way you develop a feeling for the speed levels. There are a total of 19 speed levels, which are shown on the display from 1 to 10 as 1, 1+, 2, 2+, ... 9, 9+, 10.

The touch panel on the A3500i has a "button" for each of the 5 time programs, on the A2500i the time programms are selected via the control wheel. The A3500i also has a start/stop "button" and a pulse "button" which replace the two toggle switches on the A2500i. As an exclusive function of the A3500i, there is also a plus and minus "key" with which the timer can be individually programmed to the second (up to 6:30 minutes).

In this video, the complete handling of the Vitamix A3500i is once again explained in English:

Warranty? 10 years instead of 7 years!

For all those who wonder whether with so many technical changes, the proven Vitamix quality and durability can still be guaranteed, Vitamix reassures with a whopping 10-year full warranty. Full warranty means that not only the motor block is "insured", but all parts including wear parts. This also includes the containers, which are most likely to wear out with regular use. So far, we at GrüneSmoothies.de have always had very positive experiences with the Vitamix service, which is why we can at least say in retrospect: "You can rely on Vitamix". In our experience, the service is just as industry-leading as the quality of the devices. The only prerequisite for claiming the warranty is that the device is used privately and not commercially for e.g. a smoothie bar. The exact warranty conditions for the A3500i can be found here.

Via Bluetooth, the Vitamix can be paired with an Android or iOS device. This only requires having the Vitamix Perfect Blend app on your phone. With the app you are able to "adjust" recipes and the ingredient quantities to the container used or to transfer additional time programs to the blender. In our practical test, the last function rather disappointed us. Those who really want to use programs will have a much more comfortable time if they opt for a blender with built-in timed programs, such as the A2500i or A3500i. Both blenders have the most important programs and can be started with a quick flick of the wrist. Bluetooth pairing and(!) program upload (both have to be done every time and usually take longer than the mixing process) are not necessary. Anyone who seriously wants to work with time programs should avoid the A2300i.

How do the Vitamix Ascent Series high-speed blenders differ from each other? 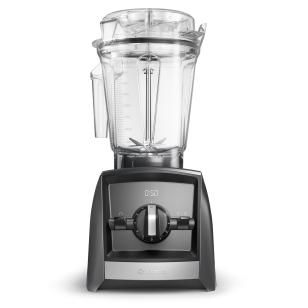 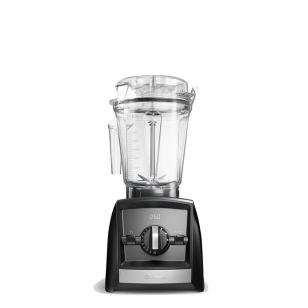 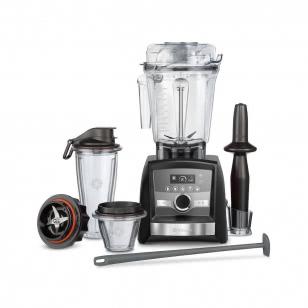 Is it worth buying the Ascent Series if you already have a Vitamix?

Most of the time, such decisions are emotional. You fall in love with the new design or get tired of the old one. In this section, we want to focus on the functional differences and advantages or disadvantages, which you should be prepared for.

Getting straight to the point, with no 1.4-liter container available, we only see the 3 years added to the warranty and the dishwasher-safe container as arguments in favor of the Vitamix's smart blenders. However, we can only describe the "high-tech" features, such as app connection, etc. as a "nice gimmick", which you do not try more than once. Usually, you want to mix something quickly and therefore don't need Bluetooth pairing or an app.

The Vitamix E310, TNC 5200, Creations (2.0) and Pro 500 are considered the most versatile and proven Vitamix models. "One container for everything" is the philosophy. The Vitamix Ascent Series, on the other hand, scores with the above-mentioned advantages and even finer blending results. Longer blades, which are already known from the G-Series (Pro 750/Pro 300), achieve this outcome. However, the disadvantage of the long blades becomes apparent when mixing smaller amounts of viscous/solid ingredients, such as frozen fruit (ice cream) or energy ball dough. In order to work reasonably well, 800 ml or more are needed. Only if the minimum amount is contained, the tamper can do its job and push the ingredients back to the blade. This is necessary to close air pockets that form around the blade. For smaller quantities, therefore, a 1.4-liter container is absolutely necessary - which is not yet available for the Ascent series. We would therefore rather advise against changing.

Vitamix Pro 750 and Vitamix Pro 300 owners have the fewest reasons to switch. The blending result does not differ from those of the Vitamix Ascent Series. We would only let the dishwasher suitability count as an argument. The 1.4-liter container is not available for the Smart Mixer! If you like to use this, it is not worth changing. However, if the new features or the look captivates you, keep in mind that the old containers are unfortunately not compatible with the Vitamix Ascent Series high-performance blenders. If the old blender is to be sold, all the containers should be sold as well. Also, you should know that with the change, a louder and also larger blender moves into your kitchen (4 cm in depth).

The latest Vitamix generation follows the Pro 750 in terms of blending results. Although the long cutting blades produce an incomparably creamy consistency in a very short time. At the same time, the mixing process is so short that no noticeable heat is generated. However, those who bought the Vitamix S30 because of its slim dimensions will be disappointed when changing it for the newer model. The Vitamix Ascent Series high-performance blenders have more power and can blend larger quantities. Of course, this requires more space for the motor and a sturdy housing. In addition, the S30 has the extremely practical 1.2-liter container, which can be used to prepare small quantities. Unfortunately this option is completely missing on all Ascent blenders. Not even a 1.4-liter container is available as an optional accessory. A switch to the Pro 750 would therefore be much more attractive.

Should the S30 now be sold in favor of a Vitamix Ascent Series blender, all containers (including the 0.6 liter containers) should also be sold, as these are NOT compatible with the new blender generation.

We appreciate your Feedback!